Probably the most important issue in understanding prophecy is the question of whether it should be understood literally. One widespread assumption is that while ordinary Scripture can be interpreted in a literal manner, with terms retaining their natural meaning, prophetic portions of the Bible should be treated as a special case, with the literal or natural meaning no longer applicable.

During the first two centuries the early church tended to interpret prophecy literally. Thus they expected Christ to return to earth to establish His kingdom and reign for a thousand years, after which new heavens and a new earth would be established.

A school of theology that sprang up in Alexandria, Egypt, about AD 190, attempted to combine biblical interpretation with the idealism of the Greek philosopher Plato. This resulted in those leaders taking the Bible as an extensive allegory and not literally.

Refuting this position, the early church was able to restore the church as a whole back to the normal, grammatical, historical, literal interpretation of the Bible. However, in the area of prophecy this was more difficult since there were prophecies that had not yet been fulfilled, and so the church was unsuccessful in completely defeating the non-literal interpretation of prophecy.

The early church floundered somewhat in its approach to prophecy and its interpretation. This was brought to a head to some extent by the teachings of Augustine (354-430). He held that while the Bible should be interpreted in its normal, literal sense in most areas, in the area of prophecy it was not to be taken literally. This view was then adopted by the Roman Catholic Church, and unfortunately the Protestant Reformers also built on Augustine’s view instead of on the views of the early church.

Yet many of these same theological leaders said some prophetic events will be fulfilled literally. For example, the Roman Catholic Church believes in a literal hell, a literal Second Coming, and literal judgments from God, but it denies a literal, future millennial kingdom. Perhaps this is because in the millennial kingdom Israel will be an important factor, and since the church consists mainly of Gentiles there has been unconscious resistance to the idea that the Jews have an important future. This problem of denying a literal fulfillment of prophecy and especially a literal millennial kingdom still persists in many churches today.

If a person does not interpret the plain statements of prophecy literally, there is no rule by which any consensus of meaning can be established; the existence of a wide diversity of interpretations shows the failure of this approach. As many as fifty different interpretations can be offered for just one passage in Revelation that could be easily understood if interpreted in its natural way. 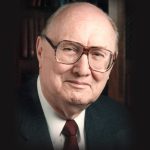 Dr. John F. Walvoord (1910–2002), a leading spokesman for biblical prophecy, was a graduate of Wheaton College, Texas Christian University, and Dallas Theological Seminary. Recognized throughout the world as an outstanding educator, author, and Bible conference speaker, he served as the second president of Dallas Theological Seminary (1952–1986), and as chancellor and later, chancellor emeritus, from 1986 until entering the presence of the Lord in 2002.