Skip to content
Home » The Importance of Standing Alone

Standing alone usually means being isolated from comfort. Martin Luther relished the solitary fight between himself and papal prosecutors. However, solitary confinement was quite another battle. For ten months in 1521–22, Luther faced a devilish adversary—loneliness.

A few days after the infamous Diet of Worms, a band of armed horsemen halted Luther’s carriage. With a flurry of swords and cursing, the men grabbed the accused heretic, threw him onto a horse, and galloped off at full speed. Frederick the Wise, also known as the “fox of Saxony,” had staged a bogus kidnapping to protect Luther. But unknown even to Frederick, an obscure knight who called himself “Junker Georg” took up residence in the Wartburg Castle only one mile from Luther’s hometown of Eisenach. In a gloomy stone chamber with a bed, table, stove, and a tree stump for a stool, this knight, known to us as Martin Luther, grew a beard and began fighting a battle against depression.

Luther wrote, “I had rather burn on live coals . . . than rot here. . . . I want to be in the fray.”1 In addition to desperate despondency, Luther professed to have seen Satan many times and apparently had even lobbed inkwells at him.2

However, Luther struck a severe blow to the unseen enemy with his weapon of choice: a quill. In just under four months, Luther translated the New Testament from Greek into German. Renowned historian Philip Schaff stated, “[Luther] made the Bible the people’s book in church, school, and house. If he had done nothing else, he would be one of the greatest benefactors of the German-speaking race.3 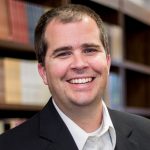